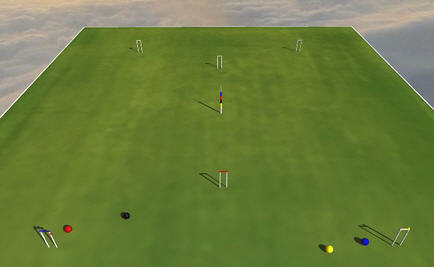 If you've never played Croquet before, it's probably not the game you think it is.

Association Croquet is a head-to-head game of skill and strategy much like snooker or billiards but on a much bigger scale.  As with those games, to be successful you need to think ahead and use a variety of techniques to position the balls where you need them to be to create a "break" of many shots.

The game is played with four coloured balls.  Red and Yellow are played by one player and Blue and Black by the other.

The object of the game is to navigate your balls through the hoops and onto the peg.  There is a set order in which the hoops must be completed.  In a full game, each hoop must be completed in both directions.  You get one point for each hoop completed and one for the peg.  So a full game is won by being the first to score 26 points, that is 13 with each ball (6 hoops in 2 directions = 12 plus one for the peg).

At the start of each turn, you can decide which of your balls to play and you then play only that ball until the end of that turn.  Initially, your turn consists of just one shot but there are ways in which you can earn additional shots and that's where the "break building" element of the game arises.

If your ball hits another ball, that's called a Roquet and it earns you the right to play two more shots, a Croquet shot and a Continuation.  To play the Croquet shot, you pick up your ball and place it in contact with the ball you have just roqueted (wherever that roqueted ball came to rest).  In playing the Croquet shot, you get a chance to move two balls, both your own and the one you originally roqueted.  So, as well as moving your own ball to a favourable position to play your next shot, you get a chance to position the roqueted ball to an advantageous position to continue the break.

After the Croquet shot, you play a Continuation shot.  With that shot, you may roquet another ball and gain a further Croquet and Continuation shot.  You can roquet each of the other three balls once.  However, if you play your ball through its next hoop in sequence in the correct direction, which is the main objective, then that also "wipes the slate" and brings all the other balls into play again as targets.

Going through a hoop also earns you one more shot with which, typically, you might play another roquet to keep the break going.  Experienced players can use the shots in this way to get the ball they are playing through multiple hoops in a single break.  The ultimate achievement is a 12-hoop break but only the very top players are capable of that.

Often a break comes to an end when a player sees that, even with a sequence of shots, s/he won't be able to navigate his/her ball to a position from where s/he can get through the next hoop.  Then that player might use Roquet and Croquet shots to make sure that the balls will be left in a position that will be awkward for the opponent at the start of his/her next turn.  That is a valid strategy and is one of the great pleasures of the game!

The game can also be played as Doubles with two players in each team.  In this form it is still Red and Yellow (as a team) vs Blue and Black.  The only difference is that each player is "attached" to the particular colour ball that they first play.  At the start of a turn, the team can decide which of their balls to play and it is the player attached to that ball who will play that turn.

The game is played in an atmosphere and with an etiquette that is similar to that of golf.  It is competitive and convivial.  Players are expected to monitor their own compliance with the rules and to behave in a manner that allows opponents to concentrate fully when playing shots.

In Golf Croquet the game is still Red and Yellow (as a team) vs Blue and Black.  In Singles, the player plays both balls of that side in alternate turns.  In Doubles, each player plays one ball only.

The balls are played in strict rotation, Blue, Red, Black, Yellow; which is the order of the coloured hoops on the peg, so there's an instant visual reminder available when playing.

Each turn consists of one stroke only.  In Golf Croquet, you score a point only by being the first to get your ball through the next hoop in sequence.  Once a player has scored a particular hoop, then no other player can score a point from that hoop and play moves on to the next hoop for all players.

Tactics in this game are markedly different from those in Association Croquet.  For example, if you can see that you cannot possibly score the next hoop with your shot, you may choose to impair an opponent's chance to score that hoop by hitting your ball to move the opponent's ball, or by placing your ball between the opponent's ball and the hoop, leaving the other ball in your team a better opportunity at its next turn.  If you see that the opponent is bound to score the hoop that is the current target, you may choose to move on towards the next hoop so that you are first in line for that one.  However, there are "offside" rules to prevent any sort of "goal hanging" at the next target hoop.

As with Association Croquet, there is a pre-determined sequence in which the six hoops are played, in each direction and the peg is the final target.  So there are 13 points available to be scored in the whole game.  The game is therefore usually played as "best of 13" (i,e, first to seven points) to determine the winner.